A Study of Qi 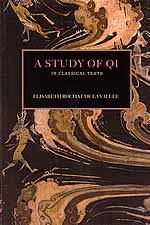 Qi manifests itself in all phenomena, and is inseparable from that manifestation, so its universality ought to make it easily accessible and understood as a concept. However, even if we are practitioners of oriental medicine or of the various art forms and movement therapies which employ qi as an instrument or a method, we often persist with very vague notions of what we are trying to influence and direct, and we rely on the catch-all term “energy” to explain what qi is.

This book is an edited transcript of two seminars given in 2004 in London by Elisabeth Rochat de la Vallée. It not only contains detailed descriptions of the various differentiated kinds of qi, but also a wide-ranging philosophical investigation and explanation of the origin and development of the concept of qi itself. It begins by looking at the historical evolution and use of the Chinese character for qi, and after this there are sections on how it appears in both philosophical texts such as the Zuozhuan, Zhuangzi, Mencius and the Huainanzi and in the medical texts of the Neijing and Nanjing. These give context and depth to our understanding of this ever-present but elusive activity of life.

"The qi which makes your life only does so because it is an expression of the natural order of life."The qi always precedes the form. There is no form if there is no qi."

Reviews
Write Your Own Review