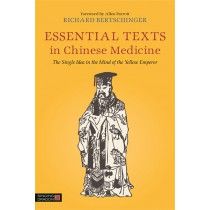 This translation of the essential texts from the Huangdi Neijing, the ancient and definitive set of books on Chinese medicine, selects the key writings of vital importance to students and practitioners of acupuncture and traditional Chinese medicine today. Bertschinger's commentary reveals the meaning of these difficult to interpret texts.

This book is like warm spring water transmitting profoundness in a very calm, non-invasive way to argue the points. It is a mentor, gently holding students' hands, and the angle and content are practice orientated. The introduction section alone accelerated my learning by years and the accurate and insightful translation of the key words illuminates some of the crucial background of Chinese thinking. -- Cheng-Hao Zhou, BM(TCM, China) MRCHM MBAcC, Lecturer and Year Leader, Northern College of Acupuncture, York, UK "Gather wood without the forester and you will soon become lost in the forest," advises the Yijing. Bertschinger is a consummate guide through the forest of China's earliest medical writings. This insightful and beautifully wrought commentary on the Yellow Emperor's Classic is essential reading for the beginning, middle and end of your studies. -- Charles Buck, practitioner and teacher of acupuncture and Chinese herbal medicine, Chairman of the British Acupuncture Council and author of Acupuncture and Chinese Medicine: Roots of Modern Practice When educating acupuncturists to work in the western world, many of us have emphasised, quite rightly, the need for complementary practitioners to become familiar with scientific medicine and with western medical practice. This tremendous work provides the opportunity and the medical content for an equal and opposite perspective to be emphasised. All western doctors from now on should be expected to read Richard Bertschinger as a serious part of their initial medical education. --Allen Parrott, PhD, Former Lead Accreditation Officer, British Acupuncture Accreditation Board 2002 -2014

First a little history: The Huang Di Nei Jing (Yellow Emperor's Inner Cannon) was compiled in the period around the Han Dynasty (206 BCE -220CE). There are two main parts to the Nei Jing: Su Wen (Elementary Questions) and Ling Shu (Spiritual Pivot). Much of the Nei Jing was difficult for later readers to understand. By the Ming dynasty (1368 -1644CE) printing was highly developed and many scholars reorganised and wrote commentaries on the Nei Jing. One of these scholars was Li Zhongzi, who wrote Nei Jing Zhi Yao (What You Must Know from the Nei Jing, published in 1642). This book contains excerpts of the most important passages in the Nei Jing with additional comments by Li Zhongzi. It is still considered an important book for those who wish to understand the roots of our medicine.

Essential Texts is an English translation of most of Nei Jing Zhi Yao with additional notes from the translator. Bertschinger has also included some commentaries from other ancient doctors and summarised some concepts in tables. The Chinese characters are included for the passages from the Nei Jing; this is a plus for those participating in the growing trend to study medical Chinese language. Passages from the Nei Jing are organised into chapters by topic: adjusting one's lifestyle, yin and yang, facial diagnosis, pulse, the organs, the channels, treatment, needling techniques, and pathology. The curious subtitle of the book, The Single Idea in the Mind of the Yellow Emperor, is explained in the last paragraph of Bertschinger's introduction. The single idea is the oneness of things throughout time and space: 'One mind, one thought, one light, one dark, one people, one world.'

One of the things I like about this book is that Bertschinger retains the poetry of the original text while remaining accurate, at least as far as is possible in translation. Nei Jing Zhi Yao has been translated into English before. Another version is Huangdi Neijing: A Synopsis with Commentaries translated and annotated by Y. C. Kong, (Chinese University Press, 2010). Kong, however, used functional translation (paraphrasing into more modern 'scientific' terminology). Let us compare passages from both translators from Su Wen Chapter 1.

Bertschinger (page 58): 'I HAVE HEARD IT SAID: In those times There were people of real substance. They lifted and raised up the skies and earth, They grasped Yin and Yang in their own hands. Their out-breath and in-breath were pure qi, as they stood alone, guarding the mind - Their muscles and flesh as one.'

Kong (on pages 7-8): 'In remote antiquity, there were immortals (zhenren 真人) who could master the laws of heaven and earth and control the forces of yin and yang. They were able to benefit from the genuine essence in their breathing exercises and maintain the integrity of mind and body.'

Bertschinger sticks very close to the original words, respecting their rhythm and beauty. Like the Chinese, his rendition is evocative and moving, yet is not made more mysterious than it needs to be. On the other hand, Kong tells you what he thinks it means without trying to directly follow the words of the original. Which one is more obscure? That may depend on the reader's point of view, but I personally find Bertschinger's translation conveys both the meaning and the feeling of the Nei Jing.

There are a few things to be criticised in Essential Texts. On a few occasions, Bertschinger's desire to convey the poetry goes a little too far. For example, in Chinese the same word means both moon and month. In passages clearly describing the three months of each season, he writes 'the three moons' even though these two words come from the same root in English. I also wish that Bertschinger gave the chapter of Nei Jing with the text, but he only lists it in the endnotes. These are small criticisms though. This is now the book I will recommend when one of my students asks how to start reading the classics. In conclusion, if you haven't been able to read or understand other translations of the Nei Jing, Essential Texts is definitely worth a try. Paul Unschuld's translation of Su Wen has dry academic accuracy, which is worth a lot, but it is expensive and hard for the uninitiated to follow. Kong's translation of Nei Jing Zhi Yao pushes a modern understanding but misses the mark, in my opinion. Some 'translations' of the Nei Jing insert their own comments into the text without separating their opinion from the original. In others, the English is laughable. Since this book contains well-translated excerpts, Essential Texts is perfect for practitioners who will benefit from the study of the Nei Jing yet are impatient with the drudgery of going through the whole text.