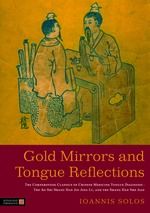 Two of the major texts in the history of tongue diagnosis are presented and put into context in this volume, reaffirming the strength of tongue diagnosis as a core diagnostic method. These key texts are made available to western readers for the first time, with typical, traditional Chinese editions reproduced alongside the translation. The author provides an excellent overview of the tongue diagnosis theories in the major classics prior to the Yuan Dynasty (1271-1368), and discusses significant developments and publications. The Gold Mirror Records, first published in 1341, was a popular manual for centuries, appearing in many editions and variations. Tongue Reflections in Cold Damage, first published in 1668, developed the field of diagnosis as a whole by adopting the analysis of tongue colour as its main principle. Both texts are introduced with meticulous English translations and notes.

This seminal text will give practitioners and students of Chinese medicine a sound understanding of the theory and practice of tongue diagnosis from the early texts, and will be of interest to academic readers of classic Chinese texts.

“Ioannis Solos saw a need and filled it. Making critical texts available to English speaking practitioners is an on-going concern for the profession. The work provides an excellent comparison and contrast of the available texts. His plan to translate and publish the important texts chronologically is marvellous as it will allow for practitioners to see how the ideas developed over the centuries, leading to current best practices in tongue assessment.”
- William Morris, PhD, DAOM, LAc, President, AOMA Graduate School of Integrative Medicine, Austin, Texas, USA

“Ioannis Solos' lucid and cutting-edge scholarship gives us direct access to the key classical literature on tongue diagnosis. Now, for the first time practitioners and scholars in the West can learn from the same sources as colleagues in China and East Asia.”
-Charles Buck MSc, BAc, BSc, FBAcC, FRCHM, Reader and Senior Lecturer, Northern College of Acupuncture, York, UK

“While in school, I assumed tongue diagnosis was as old as pulse taking. Later, I learned it was developed by the warm-disease school of the Ming and Qing dynasties. Wrong again! This book traces the true story of tongue diagnosis. The translations and illustrations provide a clarity that seems to be lacking in modern times. Ioannis Solos has given Western practitioners of Chinese medicine a precious gift with this volume.”
-Lorraine Wilcox PhD, LAc, teaches, researches, translates, and writes books on Chinese medicine, Los Angeles, USA

"It is safe to say that these two monographs are the key books for the academic and historical research of tongue diagnosis… Although Ioannis is a Westerner, he has fully dedicated himself to the meticulous study of the Chinese Medicine Diagnostics. These days I am also becoming increasingly convinced that in regards to the future of academic medical research, there can be many more common points in the approaches adopted by the Chinese and the Western scholars. And the exploration of Tongue Diagnosis is an excellent gateway for further study and collaboration between the two."
- from the foreword by Professor Liang Rong, Beijing University of Chinese Medicine

"It is unfathomable for any tongue specialist to overlook these two classics, and although they were published so many centuries ago their usefulness and theory still stands resolute to this day… Ioannis has been scrupulously researching tongue diagnostics for quite a few years, studying the classic texts and focusing on the essence. This publication is the fruit of his efforts in bringing some of the real spirit of the Chinese Diagnostics to the West, and I hope that it will contribute to the further advancement of TCM tongue research outside China."
- from the foreword by Professor Chen Jia-xu, Beijing University of Chinese Medicine

This is a translation of two important historical sources on tongue diagnosis. The first is the Ao Shi Shanghan Jin Jing Lu (Scholar Lu's Golden Mirror Records in Cold Damage), which originated in the Yuan dynasty (1260-1368) and became more detailed as subsequent editions were authored during the Ming dynasty. The second is the Shanghan She Jian (Tongue Reflections in Cold Damage), which was published near the start of the Qing dynasty. Living and working in Beijing for the last ten years has allowed Ioannis Solos to collaborate with some leading Chinese medical experts on this subject. Commencing with a concise history of tongue observation in early Chinese medicine, we come to realise that the method was quite perfunctory until the Song-Jin-Yuan era (960-1368 CE), with references to the tongue being more often concerned with pathology of the tongue itself than as a more general diagnostic indicator of physiological function. In a readable style Solos discusses the origins and history of his two main sources and the various subsequent editions.

The translation of the Ao Shi Shanghan Jin Jing Lu is eminently readable, and includes reproductions of the Chinese source text and its illustrations together with modern diagrams. Summary pages translated from the original discuss the theory and ideas behind the key elements of tongue diagnosis - the purple tongue, red tongue, yellow tongue fur, and so on. Each tongue presentation is described and interpreted, and suitable prescriptions are suggested. Although both of the source texts are primarily concerned with shanghan (cold damage) illnesses, the later publication date of the Shanghan She Jian (1668) means that it also includes some wenbing (warm disease) ideas, which are evident in one of its key concepts, the membrane source (gaohuang), and the use of the formula Da Yuan Yin (Reach the Source Drink). The slightly wider scope of this book can also be gauged from the fact that some non-shanghan formulas are mentioned, including Sheng Mai San (Generate the Pulse Powder), Bu Zhong Yi Qi Tang (Tonify the Middle to Augment the Qi Decoction) and Liu Wei Di Huang Wan (Six-Ingredient Pill with Rehmannia). Like the text by Ao Shi, the main focus in this text is on matching changes in the tongue to shanghan patterns, formulas and modifications.

As you might expect from their titles, the great majority of the formulas suggested in the two source texts are those from the Shanghan Lun (On Cold Damage), which means that the discussion focuses on using the tongue as a guide to the treatment of shanghan fevers rather than as a diagnostic tool in general medicine. We are repeatedly told that the patient might be saved from death using this method, or, more grimly, 'Most patients who have this pattern will die'. Fortunately, few of the patients we see in our clinics today are facing death due to catastrophic pandemic illness, and so the focus of this text on tongue changes during such illnesses might be seen to diminish its appeal.

Ioannis Solos's text is a reminder of the need for contextualisation when studying ancient medical writings - the fact that times and conditions change and that great care is needed to interpret what we read. For instance, a common historical cause of lower limb oedema was beriberi, but it could be mistaken to use treatments intended for this 'leg qi' problem in patients today with oedema from other causes. The patients these Ming and Qing dynasty authors were treating were very different to those we might see in our clinics. In the early 1640's repeated and devastating epidemics killed massive numbers of people – more than it was possible to bury and so people rotted in their deathbeds. In 1643 it was recorded that in many towns the only sound to be heard was the buzzing of flies. Pestilential disease was a regular part of life right back to the Shang Dynasty, and texts such as those translated by Solos largely reflect what was learned by those faced with diagnosing and treating these conditions.
So is Solos's book a useful addition to your library? If you are a student or are in the early stages of your career, the answer is probably no. If you solely practise acupuncture this text is also probably not useful - I did not notice a single mention of acupuncture in this book. However, If you have chosen shanghan as your core clinical methodology, or if you aspire to full mastery of Chinese medicine, then you probably should buy a copy.