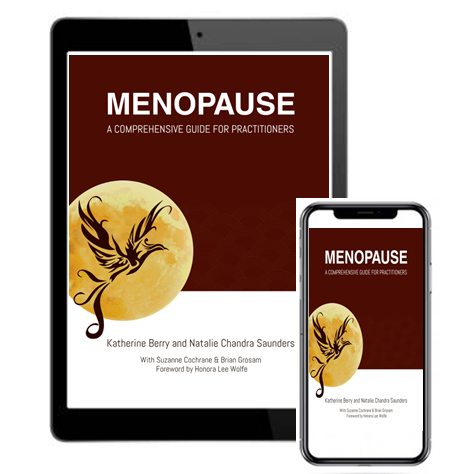 The first of its kind, this book provides a comprehensive guide to menopause and the years that follow, bringing together modern biomedical research and ancient wisdom to provide practitioners with an integrated approach to treatment.

We discuss the physiology of menopause from both eastern and western perspectives, pattern differentiation and treatment frameworks for some of the most common menopausal symptoms, and in-depth lifestyle and self care advice. We also cover a variety of conditions that frequently affect women following menopause.

Purchase the webinar 'Sex, Drugs and Menopause' which was presented by Katherine Berry and Natalie Chandra Saunders for the launch of this eBook on World Menopause Day: Buy the webinar here

Menopause: A Comprehensive Guide for Practitioners

With Suzanne Cochrane and Brian Grosam

"This textbook, the first of its kind, is an ‘encyclopaedia’ of everything we need to know about menopause. It demonstrates the immense value of Traditional Chinese and East Asian Medicine (TCEAM) for menopausal health and includes diagnosis, treatment and self-care. It is a comprehensive book that will fully equip every practitioner to treat. It is likely to become a classic".

"The textbook practitioners of Traditional Chinese and East Asian Medicine have been waiting for – a comprehensive, evidence-based guide on treating menopause.  With not only chapters that give detailed information for western medical background,  Traditional Chinese and East Asian Medicine perspectives and practical clinical applications for diagnosis and treatment, but also information on diet, self-care, and a menopause “toolkit”.  TCEAM has a valuable contribution to make in women’s health care and this text allows practitioners the opportunity to be fully informed and offer treatment with confidence".

1.2. Introduction: Your Role as a Clinician

The Biology of Menopause

The vasomotor system includes the nerves and the structures from which they arise (e.g., the medulla oblongata or spinal cord) that regulate blood flow to specific organs or body parts by controlling the blood vessels’ internal diameter.

Vasomotor symptoms (VMS) are synonymous with menopause,  including hot flushes and night sweats. They affect the majority of individuals to some extent during the climacteric period. Vasomotor symptoms can be defined as periodic episodes of intense heat accompanied by sweating or flushing.

They usually affect the head, neck, chest, and upper back, lasting 3–10 minutes, and may occur multiple times each day. In some cases, vasomotor symptoms may be accompanied by feelings of anxiety and palpitations.

The severity of vasomotor symptoms usually peaks between late perimenopause and early post-menopause. However, they may occur much earlier, even before the onset of menstrual irregularities, and persist into a person’s 60s or 70s. For this reason, it is essential that practitioners learn how to treat hot flushes and night sweats to alleviate their patients' suffering.

As women approach menopause, their ‘thermoregulatory zone’ narrows, meaning the range within which normal body temperature is maintained reduces. Thus, even small fluctuations in the external temperature can trigger a homeostatic response, including peripheral vasodilation and perspiration.

The exact physiological mechanism underlying vasomotor symptoms is unclear. However, they appear to be the result of multiple central and peripheral systems interacting abnormally due to fluctuating oestrogen and FSH levels. The fact that oestrogen replacement therapy reduces vasomotor symptoms suggests that reduced oestrogen levels are a critical factor.

The serotonergic, noradrenergic, autonomic, and vascular systems may all play a role in the development of vasomotor symptoms. There is also some inconsistent evidence suggesting the involvement of the endogenous opioid system. One theory suggests that decreased oestrogen levels increase noradrenaline release, upregulating hypothalamic serotonin receptors, which play a role in temperature control.

According to the large-scale Study of Women's Health Across the Nation (SWAN) study, the ethnic group most likely to be severely affected by vasomotor symptoms is African-Americans. The least likely groups to suffer are Chinese and Japanese women, while Caucasian and Hispanic women report similar rates of vasomotor symptoms.

The reason for these differences is unclear. In the past, it has been suggested that East Asian women suffer fewer vasomotor symptoms due to a higher soy intake. However, this does not appear to be the case. Other possible explanations are cultural differences in the way menopause is interpreted, experienced, and reported to health professionals, particularly in cultures where doctors are mostly male.

Women with a higher body mass index, especially those carrying excess abdominal fat, have a higher risk of experiencing severe vasomotor symptoms. This could be due to increased endocrine dysregulation or the additional insulation of adipose tissue. However, the precise reasoning is not fully understood.

Both active and passive smoking may increase the risk of severe vasomotor symptoms. Many of the chemicals in cigarette smoke have anti-oestrogenic properties.

Women who suffer from anxiety or depression tend to experience more severe vasomotor symptoms. There also appears to be a connection with childhood abuse or neglect and lower socioeconomic status (see chapter 5.2 Stress, Trauma, and Stress Resistance).

Traditionally, VMS (and menopause in general) have been associated with Kidney deficiency, especially Kidney yin deficiency. In reality, the aetiology of this symptom is usually far more complex.

While Kidney deficiency is common among older patients, either Kidney yin or Kidney yang deficiency may predominate. However,  it is rare to see one without at least some degree of the other. Furthermore, other zangfu are frequently involved, as are qi and Blood deficiency or stasis.

In TCEAM terms, VMS may be seen as a form of tidal heat effusion, or chaore. There are several different patterns of disharmony that may underlie tidal heat effusion, which we will discuss below. These may occur in combination with a variety of other underlying patterns.

Around menopause, the qi of the chongmai can become destabilised, causing symptoms such as hot flushes and anxiety. This is not a clinical pattern in itself, but may occur alongside other patterns, including cold, heat, stagnation, and phlegm.

The chongmai has two branches originating from Yinhui REN-1. One branch descends to the feet while the other ascends to the face. Around the time of menopause, qi in the chongmai may become destabilised causing it to rebel upward and fail to descend. This can occur as a result of various excess or deficiency factors, including heat, cold, stagnation, etc.

To make a diagnosis, at least three symptoms must be present at different physical levels (i.e. hot face, cold feet, and abdominal symptoms), in combination with anxiety.

Pulse: Firm and beating straight up and down in all three positions, from chi to cun, being most pronounced in the middle (guan) position. However, the precise quality will vary depending on coexisting excess and deficiency patterns, meaning that patients may present with a wide variety of pulses.

Tongue: Variable, depending on coexisting excess and deficiency patterns.

For food stagnation: Bao He Wan

Reviews 14
Write Your Own Review